As an undergraduate student at UC Berkeley in the early aughts, I was, like most scholars of Philippine history, deeply inspired by Reynaldo Ileto’s classic 1979 work, Pasyon and Revolution: Popular Movements in the Philippines, 1840-1910. In my first semester as a freshman, I wrote a research paper on the life of Macario Sakay, drawing heavily from Ileto’s ideas and material.

Pasyon and Revolution was a work to which I returned repeatedly, but each re-reading left me with a growing sense of unease. Something did not gel. Ileto’s question — how did the masses’ perceive the Philippine revolution against Spain and their place within it? — resonated profoundly with me. And yet, my lingering awareness that something  about his answer was not right expanded. 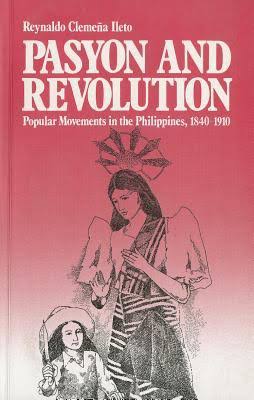 In late 2004, I first wrote down some stray notes expressing this unease —

This work left me feeling unsettled and critical.

A sentence in Ileto’s concluding paragraph [to an article of Ileto’s, “Rizal and the Underside of Philippine History”] clarified for me the unease that I had felt throughout the article: “These leaders [Lantayug, et. al.] have, until recently at least, always belonged to the ‘dark underside’ of the struggle for independence dominated by such ilustrado notables as Quezon, Roxas and Osmena.” It seems clear to me that the division between an ilustrado led resistance and a ‘dark underside’ is a false dichotomy.

There are a multitude of underside resistances, many of them with a very different self-concept from the one put forward by Ileto. It would appear that in a attempting to ‘retrieve’ history from below, Ileto has manufactured a monolith: a Filipino ‘underclass’ that conceives of power and loób in terms that sound remarkably like those used by Benedict Anderson in his “Idea of Power in Javanese Culture.”

Where in this underside would Ileto fit the Union Obrera Democratica, the first Filipino labor movement, which was forming at this time, was composed entirely of working class Filipinos and whose perceptions were sharply different from that of Ileto’s underclass? Where to put Isabelo de los Reyes’ and Gregorio Aglipay’s Iglesia Filipina Independiente? Do Macario Sakay and the Republika ng Katagalugan really fit Ileto’s description?

It would involve an extensive investigation of sources, but it seems likely that Ileto’s ‘underside to Philippine history’ was actually a minority of lower class resistance movements.

This brings me to a second objection: underside? Lower class? Ileto’s article really has no definition of class. What groups constitute the subject of his investigation? It would seem that Ileto has merely taken the ilustrado concept of ‘pobres y ignorantes‘ as his starting point and has attempted to listen to this ilustrado defined group and to recover their voice. It seems doubtful that the Philippine peasantry and incipient working class defined themselves in these terms.

An investigation that started by examining the historical relations of production and exploitation might have given much needed definition to Ileto’s concept of ‘underside.’

I also posed the question —

Both Ileto and Vicente Rafael have explored the way that Latin and Spanish words like ego sum, Verbo, potencia, Espiritu, and Personas can become reified and take on bizarre, unintended meanings through colonial pretensions of untranslatability and ‘underside’ reappropriation. Is it not odd then that Ileto should do something similar with loób, kapangyarihan, and liwanag? Does this not open the door for bizarre and unintended meanings through academic pretensions of untranslatability and scholastic reappropriation?

I did not turn my attention to these questions until I began work on my Master’s thesis at Berkeley in late 2007. I determined that I would undertake a careful re-examination of Ileto’s work and attempt to conduct my proposed “extensive investigation of sources.” I went back over my old notes and posted them, in November 2007, on an older blog that I maintained at the time, under the title Notes on Ileto’s “Rizal and the Underside of Philippine History.” While the site no longer exists, the Waybackmachine maintains a copy from December 2007.

In 2008, Ileto responded to my post and, while the website containing the response is now lost to the sands of time, Von Totanes in a chapter published in 2011 documented the exchange.

The work attempted to do two things: to document what I considered the marked limitations of Ileto’s answer to his critical question, and to formulate an alternative methodology to answer it adequately.

I presented my findings on June 18, 2010 before a conference hosted by the Institute of Southeast Asian Studies at the National University of Singapore, Engaging the Classics in Malay and Southeast Asian Studies Conference. Over the course of the conference, Bomen Guillermo and I spoke extensively, and discovered that we were addressing ourselves to similar issues in regard to translation in Ileto’s work. Guillermo’s ideas were published in Philippine Studies in 2014.  He wrote

Guillermo carried out a sustained and careful examination of Ileto’s nontranslation of loób in his work and the implications of this for the plausibility of Ileto’s argument.  In a footnote to Guillermo noted, “Indeed, although Scalice has devoted much more time developing a critical Marxist perspective on Ileto’s work, I have been surprised by our convergence of views independently arrived at while using quite different tools.” I can only express a similar feeling of pleasant surprise at this marked convergence.

My attention, however, turned to my doctoral dissertation on the Communist Parties of the Philippines in the 1960s and early 1970s. My thesis on Ileto gathered dust for several years.

In 2017, having completed my dissertation, I revisited the old project, rewriting my thesis into two articles, effectively reworking and separating its two aspects — criticism and alternative methodology. These parts were published in 2018 as “Reynaldo Ileto’s Pasyon and Revolution Revisited, a Critique,” SOJOURN: Journal of Social Issues in Southeast Asia 33, no. 1 (2018): 29–58, and “Pamitinan and Tapusi: Using the Carpio Legend to Reconstruct Lower-Class Consciousness in the Late Spanish Philippines,” Journal of Southeast Asian Studies 2, no. June (2018): 250–76.