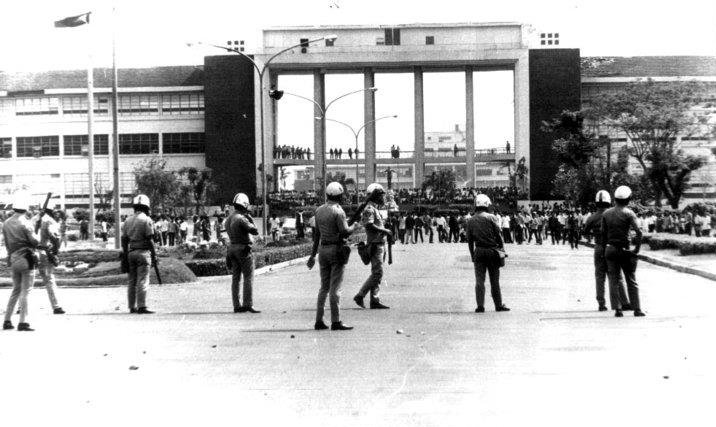 One of the pivotal moments in the history of the Philippine Communist Parties in the 1960s and early 70s, in the period leading up to the declaration of martial law by Ferdinand Marcos in 1972, was the event which became known as the Diliman Commune. 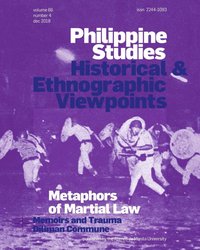 Over the course of the first nine days of February 1971, students at the University of the Philippines (UP) Diliman erected barricades around their campus, fought off repeated attempts by the military to tear the barricades down, and took control of the university.

I dedicated an entire chapter of my 2017 doctoral dissertation to an examination of the events of the commune using the written material produced by the communards themselves in conjuction with contemporary newspaper records. I reworked this material into an article which was published in December 2018 in the journal Philippine Studies.

In the opening of the article I wrote

Joseph Scalice, A Planned and Coordinated Anarchy: The Barricades of 1971 and the ‘Diliman Commune.’,” Philippine Studies: Historical and Ethnographic Viewpoints 66, no. 4, 482. While the occupation of the Diliman campus invariably merits passing mention in the wave of memoirs, both personal and collective, produced over the past two decades, it has not been subjected to serious scholarly scrutiny. As a result, two myths, which entered circulation in the months immediately after the events themselves, spread and became the established narrative of what became known as the “Diliman Commune.” The first is that the events were limited to Diliman; they were not. Barricades went up at the University Belt in downtown Manila and at UP Los Baños simultaneously, and there were pitched and protracted battles waged at both locations. Subsequent accounts entirely ignored these concurrent barricades. The second myth is that the Commune emerged spontaneously. A headline article of Bagong Pilipina in its February 1971 issue expressed this conception: “The Diliman Commune was a spontaneous reaction to the needs of the Diliman Republic.” The story stuck.

In examining and puncturing these myths, I attempted to use the Commune as a case study of the role played by the political program of Stalinism in shaping and corraling the social anger in the explosive years leading up to the imposition of military dictatorship by Ferdinand Marcos. Among the conclusions I reached was the following.

There is a culture about the Communist Party of the Philippines and its affiliated organizations that is simultaneously inflected by amnesia and nostalgia. The KM, under the leadership of Jose Ma. Sison, had endorsed Ferdinand Marcos for president in 1965, but four years later they denounced him as a fascist and entered an alliance with the bourgeois opposition. They did not account for their prior support, but buried it: “Oceania had always been at war with Eastasia.” This cultivated amnesia was combined with a nostalgia for an imagined past. The young people joining the party or its front organizations learn of the First Quarter Storm and the Diliman Commune, events that are never understood historically, but simply appreciated as the great moral lessons of the past, examples of the revolutionary heroism of their predecessors. This appreciation is not entirely baseless. The youths and workers who fought in the battles of the 1960s and early 1970s were often heroic, proving themselves capable of self-sacrifice and endless labor. The best layers of an entire generation fought courageously, and many in the end were tortured and killed by a brutal dictator. But to what end? Here the only honest means of honoring the struggles of this generation is to subject to careful study and trenchant criticism the program and machinations of their leaders. Such an historical examination, to which this article is a small contribution, reveals that the sacrifices made by these youths and workers were first demanded and then dispensed with by Stalinism, which ensured that their lives were no more than grist on the millstone of dictatorship. Much of the Stalinist parties’ political authority among the masses derived from their claim to be Marxist; I am challenging that claim. (507-8)

The majority of the article is dedicated to a careful reconstruction of the events of the barricades of 1971. It is a remarkable thing that such dramatic events as those of February 1971 in the Philippines have not yet been subjected to careful scholarly scrutiny. Researching and writing this account was a compelling experience and I believe that the article is an exciting read, by academic standards at any rate.

In some ways, the myths surrounding the Diliman Commune are an indication of how the flagship state university campus, because of its prominence in popular consciousness and because of the preeminence of its graduates, has been allowed a disproportionate share of the written political history of the past century. Campus political radicalism in the university belt in downtown Manila, for example, has been given comparatively little coverage as a result of this skewed historiography.

I wrote a bit on this in my dissertation, in the chapter on the student protests of 1969.

Joseph Scalice, Crisis of Revolutionary Leadership: Martial Law and the Communist Parties of the Philippines, 1957-1974, PhD Dissertation, UC Berkeley 2017, 396-7. The preponderance of higher education in the Philippines was concentrated in Manila and disseminated from privately owned, profit-driven institutions. Their facilities stood clustered along Azcarraga on the northern bank of the Pasig, and within the squat stone walls of Intramuros on its south. Most were crowded, multi-story affairs to which entrance was afforded by a single roadside gate under the watchful eye of armed security guards, who inspected the entering students’ uniforms and identification cards. There were in 1969 over half a milion college students in the Philippines, one of the highest college enrollment per capita figures in the world. The majority of these students came from working class and peasant families, and were working their way through school — they were janitors on the night shift, stringers for newspapers, secretarial assistants for the university administration, and sales clerks on Escolta.

From Azcarraga, traverse the length of Quezon Boulevard past the circumferential Highway 54 — now renamed de los Santos, but the name had yet to take — and you would arrive in Diliman on the outskirts of Quezon City. There the state university — UP — sat in seeming rural isolation, its expansive facilities still spreading outward into fields of cogon and talahib. At its southern and eastern fringes were the impoverished communities of Cruz na Ligas and Balara, pushing towards Marikina. Twenty-five centavos and a thirty minute jeepney ride would get you from Diliman to Azcarraga, but a lifetime of labor would not have gotten most students from the university belt into the state university. UP provided an education to the children of the elite and the upper middle class, but also to the most outstanding scholars throughout the nation. The valedictorian of an impoverished provincial high school could be expected to attend the state university, and on a full scholarship. For the rest of the students, they would work their way through school downtown. Finally there were the elite religious schools — Ateneo, La Salle, San Beda. These were the enclaves of the extremely wealthy, their corridors of power reserved to cassocks and caciques. They were entirely quiescent in 1969. It was the class divide between Azcarraga and Diliman that shaped the course of the protests.

Over the course of the first week of February 1971, as barricades were erected in both downtown Manila and at Diliman, six students were killed protesting against Marcos and the repressive state apparatus. Five of these were in downtown Manila and one on the Diliman campus, but only the student who was killed at UP — Pastor Mesina — is now remembered.